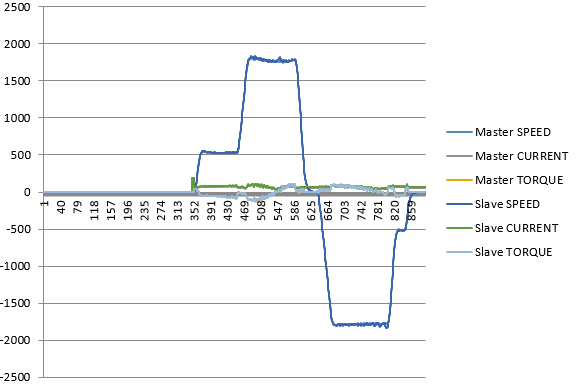 Problem Description:  Malloy Electric was contacted by Power Plant x in regards to an issue on a coal dumping unit at one of the plants within the Malloy geography.  The initial concern was in regards to the current programming of the twin, master-follower, ACS800 setup controlling the operation of the dumper.  The main issue was the coal dumping unit breaking mechanical and electrical components such as the main ring gear, the gear boxes, and the electric motors.  Power Plant x wanted an evaluation of the VFDs. Malloy had suggested taking a look at the mechanical system as well and Power Plant x agreed to that suggestion.

Cause:  There were two discovered issues with the coal dumping system.  The first issue was electrically related to the VFDs.  At some point, motors on the system had been changed without the drives re-ID-running the motors.  The ACS800 VFDs run in a vector control scheme called “DTC” or direct torque control.   This control mode is an advanced control algorithm that provides a high degree of accuracy in regards to motor control.  Without running an ID run on each motor (each time a motor is installed), the system accuracy is compromised.  During the motor ID run, the drive injects DC voltage and calculates stator resistances and inductances to insure the load agrees with the drive parameters as well as adjusting drive parameters for the best motor control.  DTC is a proprietary control to ABB but provides the best control available in an open loop vector system, such as this coal dumper.

The second issue was mechanically related to a binding of the driving pinion gears of the main gearboxes.  In essence, the master and the follower weren’t synchronized.  The ring gears are made up of sectional slewing rings (gear sections). When these bound, one of those sections broke loose and was thrown completely off of the ring. Due to the two gear drive systems – the master and the follower – not being synchronized, the gearboxes and driving shafts were broken or damaged.  Since the gearing wasn’t properly aligned or meshed pinion to gearbox, and master to follower, the motors were out of sync and the gearing bound up.  Thus, the system failed mechanically.

Solution:  Two things needed to happen, as explained by the cause of the failure.  First, the VFDs needed to be tuned to the motors in operation.  This tuning would allow the drives to control the motors in unison.   Once the tuning on the motors had been completed, Malloy monitored the system running unloaded and verified parameters to insure the systems were set up as a speed referenced Master and a torque-follower Slave.  Once the system made a few cycles unloaded, Malloy proceeded to test run the system loaded with rail cars. Figure 1 and Figure 2 indicate the graphs of the drives when unloading rail cars.

Second, the mechanical system was binding due to misalignment of the aforementioned components.  The solution to this was to realign the pinion gearing to the drive gear.  Malloy advised that the gearing needed alignment and Power Plant x had aligned the pinion gearing prior to VFD testing.

The below images are related to the solution of this repair.  Figure 1 and 2 are the plots that were captured from both drives as the system was running with loaded cars.  Figure 1 shows the third car that was dumped and Figure 2 shows the tenth car.  The speed controller gains were adjusted to try and assure that the drives were not causing oscillations in the systems.  The speed of both the master and slave drive are stable and nearly identical.  The current of both drives has some oscillations but remained below nameplate current of 104Amps with and average current around 60Amps during the cycle.  There were visible oscillations in the torque that correlated to the gearing and mechanical issues that were observed in the system.

Since the system doesn’t have a real positive means of speed feedback, such as an encoder or tachometer, the overall operation of the VFDs appears to be accurate and operating correctly and to the best of their capabilities.